This year has marked the beginning of America Votes’ six year plan to build back power in the states. As we announced at the State Summit back in February, we’ve refocused our efforts on modernizing elections and impacting redistricting while continuing our role as the coordination hub of the progressive community.

We’re excited to mark America Votes’ enhanced mission with a refreshed look and a new website!

Our website has been improved to better tell the story of America Votes and the permanent coalition we’ve built with more than 400 state and national partners across the country. Together, our community has created a stronger, more impactful progressive movement that will take us through 2020 and beyond.

Thanks for visiting our website, and we hope you enjoy the new look! 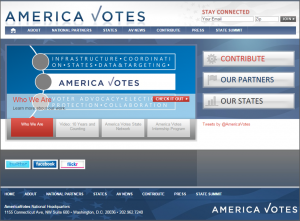 Greg Speed in HuffPost: Americans Should Push Back Against Voter Suppression Laws

AV President Greg Speed’s latest Huffington Post blog post celebrates the anniversary of the Voting Rights Act of 1965. His piece, “Americans Should Push Back Against Voter Suppression Laws,” discusses the challenges ahead and importance of restoring the full VRA, and recognizes some of the successes we’ve seen in states to modernize elections.

The VRA in place today — or what’s left of it — lacks the full power to protect minority voters that it had for most of the past half-century. In Shelby County v. Holder, the Roberts Court effectively gutted Section 5 of the VRA, an essential component requiring pre-clearance of voting changes in states and jurisdictions with a record of discriminatory practices. Justice Roberts proclaimed in Shelby, “Our country has changed.” But the onslaught of recent voter suppression laws tells a very different story.

One of the central questions facing voting rights advocates post-Shelby is how to restore the VRA’s full scope of protections. Recent voting legislation in the states offers evidence of both the need to restore the VRA’s protections for minority voters, as well as progress toward building modern, more accessible state voting systems.